Stu Warshauer studied classical violin for 10 years starting at the age of 6. After college, he devoted himself to a business career and helping to raise and support his wife and four children. In the late 1980’s he heard Klezmer music for the first time. The music turned him on and back to his fiddle.  He became the fiddle player for the Cincinnati Klezmer Project when it was formed in 1993. Later that year, after moving to Naples Florida, he founded the Naples Klezmer Revival Band and started pursuing his dream of a second career in music. Stu still enjoys playing the violin he received for his Bar Mitzvah over 50 years ago and has never owned or desired owning a different instrument. He also plays with the Temple Shalom “Soul Shabbat” band.

Marty grew up in Chicago and at age 10 started clarinet lessons. He played in his high school orchestra and intermittently afterward.  After retiring from an active medical practice, he returned to his passion with music. Besides klezmer he enjoys playing classical music and jazz. He is a Board Member of the Music Foundation of Greater Naples. He has played with the Klezmer Band since 2007. He also performs with the Temple Shalom “Soul Shabbat” band. He is the webmaster of this website.

Jerry is a native New Yorker and began his accordion studies at age 8.  For the next ten years, he studied classical accordion under the tutelage of major virtuosos, performing in various venues including Carnegie Recital Hall at age 16.  Jerry formed a 4 piece instrumental band known as “The Madison” and they did various gigs for Weddings & Bar Mitzvahs in the Greater New York area.When leaving for undergraduate school and beginning his path toward becoming a Dentist, the accordion was stowed away and forgotten about for the next 50 years! It was only in 2015 that Jerry met members of the Music Foundation of Greater Naples and this sparked a “fire” within for Jerry to get the accordion out of “mothballs” and begin to enjoy his new found friendship with this organization and to renew his studies and love for his instrument.   Soon after, Jerry was introduced to the Naples Klezmer Revival Band and as they say in show biz….THE REST IS HISTORY!

Stewart received a Ph.D. in music from Northwestern University in 1985.  He served as a professor at Minnesota State University for 37 years – first as Director of Bands and later as the Founding Director of the Center for Excellence in Teaching and Learning,  where he helped 600 faculty improve their teaching.  After retirement he moved with his wife Liz, to Ft. Myers, Florida, where he has lived for three years.  He is the principal trombonist with the Gulf Coast Symphony and has played with the Klezmer Naples Revival Band for over two years. Stewart was a trombone soloist/clinician for many years with the Conn company and has soloed with many orchestras and concerts bands, most recently with the SW Florida Concert Band in Ft. Myers. Stewart continues to travel nationally and international to deliver workshops on topics related to teaching and learning for faculty at universities and colleges.  His most recent workshops were for the U.S. Army, two universities in Beirut, Lebanon and universities in Lahore, Pakistan and Muscat, Oman.

Jason is the band’s versatile pinch hitter. His talent on the keyboard and the accordion permit him to step into either role when he is needed and when available. Jason’s full time job requires a good deal of travel, so he is not always available, but when he is, it is always a pleasure to work with him. He and wife, Carole , are the proud parents of musically, talented teen-age twins, who will show up occasionally to perform with the band.

Jane is one of the busiest musicians in Naples. She is the Cantorial Soloist for the Naples Jewish Center, the Music Director of the Temple Shalom Religious School; a  teacher in the Temple Shalom Nursery school and has a cadre of over 20 private students whom she teaches guitar, piano, and cello. She is a founding member of the Naples Klezmer Revival band, and is often called the “heartbeat” of the band because she sets the tempo for most of the repertoire. 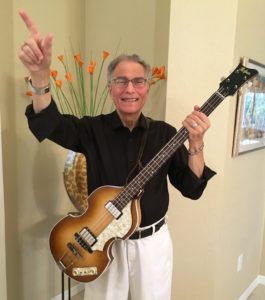 He studied bass guitar at a music school on Long Island, N.Y. for many years. He proceeded to play with several garage and basement jam bands. He finally came out of the basement to play base guitar for the classic Rock band “Short Term Memory”, performing in clubs and at festivals on Long Island. When asked to become a member of “Blue Condition”, Perry leaped at the chance to play Blues as well as Rock. He made an even greater leap when he joined the Naples Klezmer Revival band. Growing up in the New York area, Klezmer was the music and Yiddish the language that his parents and grandparents listened to on WEVD – “The station that speaks your language.” Perry also played with the Temple Shalom “Soulful Shabbat” band. He will be missed.